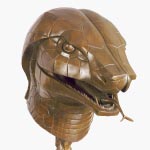 The snake is believed to be closely related to the dragon, and though its image is not as benevolent, it is said to have supernatural powers. In fact, though snakes are considered cunning and even evil, they are venerated and feared because they are thought to be the embodiments of demons and spirits. Therefore, to buy a captive snake with the intention of liberating it is a virtuous action, even though Chinese tales caution against befriending these creatures. According to the legend of the White Snake, a young scholar fell in love with a white snake demon that had turned itself into a beautiful maiden. When her true identity was revealed, disaster ensued and the snake demon was thrown into a well. Not all images of the snake are so daunting. In antiquity, immortals were thought of as half-human, half-animal creatures featuring long snake tails. Images of such creatures appear often in the interior decoration of early dynastic burials. Similar to the immortals are Nüwa and Fuxi, the Chinese creators of the world, who are represented with human upper bodies and interlocking snake coils. —Paola Demattè in Ai Weiwei: Circle of Animals, ed. Susan Delson