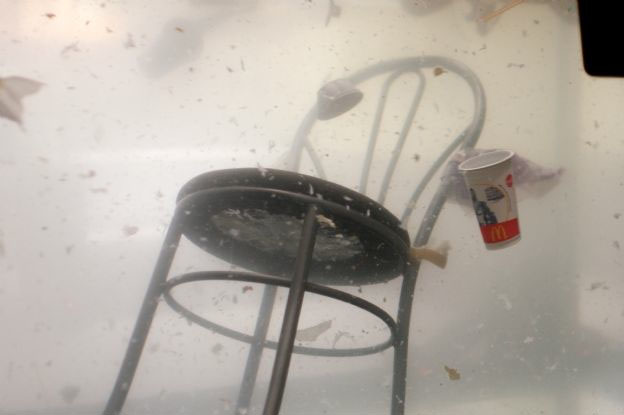 Stills of Flooded McDonald’s, 2009, courtesy of the artists and Peter Blum Gallery, New York. Produced by the Propeller Group in cooperation with The South London Gallery, Louisiana Museum of Modern Art and the Oriel Mostyn Gallery

August 9 to November 28, 2010
Since 1993, Superflex—the Danish art collective based in Copenhagen and Rio de Janeiro, whose members are Jakob Fenger (b. Roskilde, 1968), Rasmus Nielsen (b. Hjørring, 1969), and Bjørnstjerne Reuter Christiansen (b. Copenhagen, 1969)—has staged unconventional artworks that use social intervention as a means of calling attention to such issues as democratization, environmentalism, and consumerism. The group’s “actions” and provocations have ranged from an initiative that helped Thai pig farmers convert barnyard excrement into marketable biofuel to an urban project for which they conspired with convenience store owners to disorient customers at the checkout by informing them their “purchases” would be free.

Commercial imagery, such as the logos and signature color combinations that are increasingly inescapable aspects of our visual landscape, has inspired contemporary artists since even before the Pop era. For Flooded McDonald’s (2009), Superflex meticulously constructed and filmed a life-size replica of the interior of an actual restaurant of the fast-food chain. The artists borrow the cinematic vocabulary of documentaries, ads, and disaster movies to create this suspenseful, ambiguous drama. For reasons unknown, the patrons and staff have left the premises, leaving viewers behind to watch, think, and speculate.