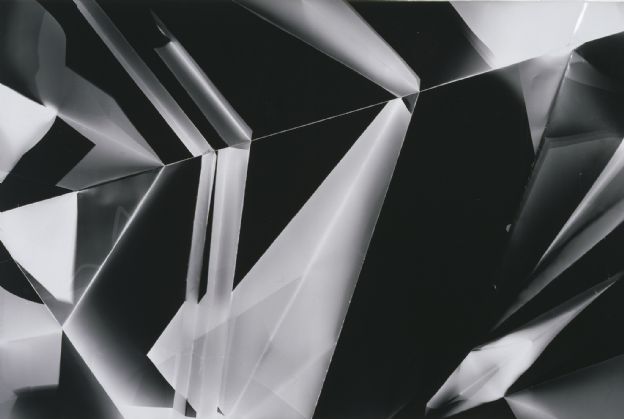 April 30 to September 13, 2009
Los Angeles-based artist Walead Beshty (b. 1976) creates photographs and sculptures that reconsider some of the fundamental premises of modern art. His mesmerizing photographs blend an enduring fascination with modernist visual culture and an astute inquiry into the nature of photography. He often works with historical formats, including stereographs and photograms, but he also makes use of more recent technologies, such as color processors and digital printers. The resulting pieces reflect Beshty’s concomitant interest in the historical, conceptual, and formal premises of the medium. Moreover, his practice brings attention to the ideological underpinnings of aesthetics, the indeterminacy of viewing, and the ways that photography shapes our understanding of both history and the world around us.

The photograms in this exhibition update a cameraless process pioneered by early-20th-century artists László Moholy-Nagy and Man Ray, who produced unique black-and-white prints by placing objects on photosensitive paper and then exposing them to light. Beshty recasts this technique by making use of color processing and large-scale printers. His oversized photograms feature interlocking facets of prismatic color that reflect the way the artist folds or curls the photographic paper before exposing it to light. The resulting works are seductive, elusive abstractions, yet they are actually material representations of the very process of their creation.

The exhibition also featured a group of shatterproof glass sculptures fabricated to fit in standard-sized FedEx boxes. The pieces are then shipped via FedEx, rather than professional art shippers, between the artist’s studio and each exhibition venue. Evocative of both Marcel Duchamp’s Large Glass and later Minimalist sculptures, Beshty’s glass boxes acquire additional cracks each time they are exhibited, thereby providing a visual trace of their physical movements and, more broadly, the trafficking of contemporary art objects.

This exhibition was organized by associate curator Evelyn Hankins. Directions: Walead Beshty was made possible, in part, with support from Trellis Fund.