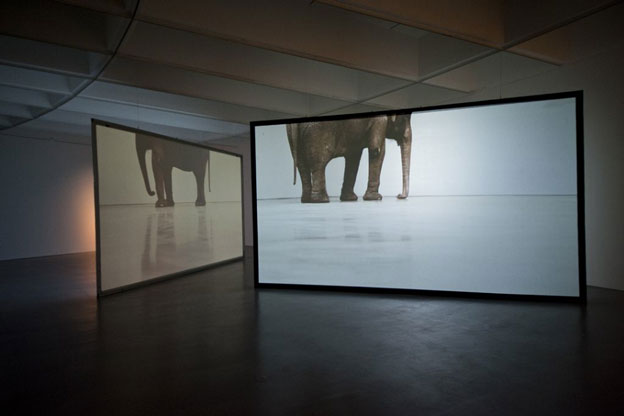 Installation view of Douglas Gordon, 2004, at the Hirshhorn Museum and Sculpture Garden

February 12 to May 9, 2004
The Smithsonian’s Hirshhorn Museum and Sculpture Garden served as the exclusive East Coast venue for the first North American survey of works by Scottish artist Douglas Gordon (b. 1966, Glasgow, Scotland). On view from February 12 through May 9, the exhibition Douglas Gordon included large-scale projected video installations, text pieces, still photographs, and filmed images on video monitors created by the artist from 1993 to 2002. A highlight of the DC, installation was the artist’s work Play Dead: Real Time (2002), which made its US museum debut at the Hirshhorn.

Best known for his film and video installations, which draw upon classic Hollywood movies, Gordon studied at the Glasgow School of Art and the Slade School of Fine Art, London. His performance-oriented collaborations became the focus of the Glasgow art scene during the late 1980s and early 1990s, and he drew international attention with his 1993 piece 24 Hour Psycho, in which a radically slowed version of Alfred Hitchcock’s film is projected on a suspended screen.

As in 24 Hour Psycho, much of Gordon’s work mines popular culture and alters existing sources – from movies such as Rear Window, The Exorcist, and Taxi Driver to obscure documentary footage – to challenge perceptions and recast viewers’ expectations. The artist has received three of the most esteemed international accolades in contemporary art: the Guggenheim Museum’s Hugo Boss Prize (1998), the Tate’s Turner Prize (1996), and the Venice Biennale Premio (1997). Darkness and light, the tension between good and evil, and doppelgänger imagery are key to Gordon’s conceptual approach. Renowned for projected video installations that “sculpt” time, Gordon often alters existing source material to explore memory, perception, and ideas about the human condition.

Douglas Gordon was organized by the Museum of Contemporary Art, Los Angeles, and was curated by Russell Ferguson, deputy director for exhibitions and programs and chief curator at the University of California, Los Angeles, Hammer Museum, and former associate curator at the Museum of Contemporary Art, Los Angeles. The Hirshhorn presentation was organized by Kerry Brougher and Associate Curator Kelly Gordon. It was accompanied by a 184-page illustrated four-color catalogue, which includes an interview with the artist and essays by Russell Ferguson and four other contributors.

The exhibition was made possible by generous support from Susan Bay-Nimoy and Leonard Nimoy, Catharine and Jeffrey Soros, The Thornton S. Glide, Jr. and Katrina D. Glide Foundation, The Peter Norton Family Foundation, the MOCA Contemporaries, and the New Media Project. Additional support for the exhibition catalogue was provided by Art for Arts Sake. The Hirshhorn’s presentation of Douglas Gordon was made possible in part by Aaron and Barbara Levine and with special funding from the Holenia Trust in memory of Joseph H. Hirshhorn.