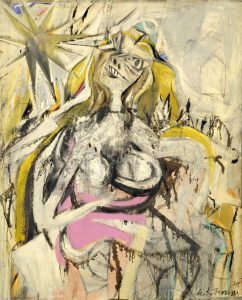 De Kooning’s painted Woman of 1948, (fig. 1) is the first major surviving painting from his second Woman series, during the same period as his black-and-white abstractions. His aggressive distortion of the figure is unsurpassed in his earlier figurative works, his swiftly applied paint strokes simultaneously defining the subject and dissolving it. As with previous paintings, the effect of pictorial immediacy belies the complex methods that went into the work’s production. While this appears to be a rapid, spontaneous rendering, examination shows that de Kooning worked on it in stages and selected and exploited his materials to underscore his imagery.

Much has been made of de Kooning’s return to the figure in the early 1950s, but an untitled black-and-white abstraction on the reverse of Woman (fig. 2), and two unfinished figure studies on the reverse of the abstraction Black Friday (1948; Princeton University Art Museum), suggest that he never abandoned it, painting a number of figural works in the late 1940s at the same time that he was producing abstractions. De Kooning was never particularly concerned with the distinction between abstraction and figuration, once remarking, “After a while all kinds of painting become just painting for you—abstract or otherwise.”1 Moreover, examination of Woman shows that he initially conceived this work as a black-and-white abstraction, adding the anatomical elements later on. A paint cross-section taken from the woman’s skirt, for example, shows a heavy buildup of paint, in layers limited to a range of warm whites, grays, and black, below the upper layer of pink (fig. 3). This sample and several others taken throughout the painting show that the colored paints used for the figure, and the off-whites around the star in the upper left corner, were added only in the final stages of the painting’s composition.

A comparison of the paints of Woman with those of Zurich (1947; Hirshhorn Museum) also shows less of a dichotomy between de Kooning’s black-and-white abstractions and his figurative pictures of the period than previously thought. For the off-whites of Woman de Kooning used paints with a similar pigment composition to those of Zurich: titanium dioxide, predominantly, with small percentages of zinc white and smaller amounts of cadmium yellow and orange and iron oxide to give the white paint its warm tone. The binding medium of these white and off-white paints, as well as the intense pink paint of the woman’s skirt, is also the same as that of Zurich: a mixture of linseed oil and pine resin (colophony), suggesting an oleoresinous house paint.2 The black paint is also a house paint, an oil-modified alkyd. Identification of these paints in Woman, and of those used in colored abstractions such as Special Delivery (1946; Hirshhorn Museum), contradicts the assumption that de Kooning’s paints, with few exceptions before about 1960, were conventional artists’ paints applied in unconventional ways.3 Rather, Kooning took advantage of a broad range of the house paints available in the 1940s, purchasing them at different times and from different vendors. All, however, were marketed as “oil paint.”4

Like many of de Kooning’s works from the later 1940s and the ’50s, Woman is remarkable for its emphatic surface texture, in large part a result of the materials the artist chose. The painting was executed on the rough side of a fiberboard panel, with no ground layer to diminish the board’s prominent screen pattern (fig. 4). As in other works of the period, de Kooning added coarse, granular materials to his inexpensive commercial paints, accentuating their coarseness: paint cross-sections, dispersed pigment samples, and microscopic examination of the surface all show that he blended quartz, probably sand or small pebbles, into the gray paint near the lower right corner, and shards of brown glass into the white and pink paints around the seated figure (fig. 5a and fig. 5b).5 He also mixed significant quantities of plaster of Paris into the off-white paints used to render the figure’s torso and the perimeter of the star in the top left corner. The addition of this powder contributes substantially to the coarseness of the paint, as does yet another addition, of generous amounts of palette scrapings, to the final layers. As with other works of the period, de Kooning also mixed and rubbed charcoal into and onto the paint surfaces, deliberately smudging the brighter colors.

The work’s pronounced texture, however, is as much due to de Kooning’s methods of applying his paints as it is to the paints and their additions themselves. In this work he manipulated paints of vastly different consistencies, applying them with a combination of brushes, palette knives, and scrapers to produce passages that almost overwhelm the details of the subject. The woman’s schematically rendered breasts, shoulders, and multiple arms, for example, as well as the star in the upper left corner, are rendered in opaque off-white paints combined layer upon layer in almost sculptural masses (fig. 6). By contrast, de Kooning diluted the black alkyd paint that outlines the figure’s breasts and torso to the consistency of watercolor, letting it flow down the picture surface in runnels so that it stained the lower paints to a gritty black (fig. 7). Before it dried, he went back over the paint with a dry brush or knife, scraping and dragging his tools through the nearly dry lower white until the two colors assume a scuffed, troweled appearance.

Although parts of Woman were certainly executed with speed and immediacy, the whole involved calculation and control over an extended period. The cross-section from the woman’s skirt, and microscopic examination of the surface with a stereo microscope provide evidence that the main areas of the lower paint layers were dry before the uppermost paint layers were applied. This approach seems at odds with the artist’s gestural style, but it was the logical consequence of a working method that included the use of more rapidly drying commercial paints and a practice of painting in distinct stages with significant passages of time between them.

Many visitors to de Kooning’s studio described his working method as protracted rather than slow in speed. He worked in spurts of feverishly concentrated activity separated by long periods of studying the image. His willingness to modify his painting in considered stages illustrates an element of deliberation that seems contrary to the apparent spontaneity implicit in the words “action painting.” Yet even Harold Rosenberg, who coined that phrase, acknowledged that de Kooning never used improvisational techniques exclusively: “Though they may start with a scribble or a sign, his forms are animated by conscious intuition…. Without being premeditated, his movements occur under the scrutiny of his aesthetic conscience.”6

Technical examination and analysis leave little doubt that with Woman de Kooning was embarking on a significant initiative of freer paint handling, even while its appearance of immediacy was a quality he worked long to achieve. While the rough, unprimed support, the muted palette, and the use of coarse-textured house paints relate Woman to the colored abstractions and the black-and-white paintings of the same period, the artist’s more gestural method of painting handling may be seen as moving toward the methods he would develop in the 1950s.

2 The presence of cadmium pigment in the off-white paint indicates that de Kooning may have modified the house paint with artists’ paints.

3 This was Thomas Hess’s assertion in Hess, “De Kooning Paints a Picture,” ARTnews 52 (March 1953), 65.  In 1972, Hess wrote that de Kooning had confined his use of house paints to his black-and-white paintings; see Hess, Willlem de Kooning: Drawings, New York, 1972.

4 Until around the 1920s, commercial house paints used binders similar to those in artists’ paints, although sometimes of lesser quality: drying oils mixed with a variety of natural resins.

5 Quartz and glass were identified based on inferences from SEM-EDX and polarized-light microscopy.