Mexican-born artist Aliza Nisenbaum joins Hirshhorn assistant curator Betsy Johnson for a discussion about her vibrant, community-based portraits, which have taken on new meaning during this time of social isolation.

Nisenbaum’s best-known artworks are intimate portraits of fellow immigrants—a natural outgrowth of her volunteer work on projects such as artist Tania Bruguera’s Immigrant Movement International (IMI)—many of whom are undocumented and accustomed to living in a state of relative invisibility. A firm believer in the importance of interpersonal relationships, she has developed a practice that is founded upon an attitude of openness and collaboration with her models, empowering them to make choices about how they are represented and soliciting their feedback throughout the process. Recently, Nisenbaum has begun to incorporate images of people dancing into her paintings, inspired in part by a quote from writer and activist Alice Walker, “Hard times require furious dancing.” A salsa dancer since her teens, the artist frequents social arenas, such as salsa dance clubs, to observe how people assemble in spaces that offer community, and sometimes sanctuary, for groups that often face scrutiny for their age, gender, nationality, or sexual orientation. Her models are selected from these experiences, and together they tell an uplifting story about people, their histories, and the power of empathy.

Hear from Aliza about her work and how this historic moment has shifted her current thinking and practice. 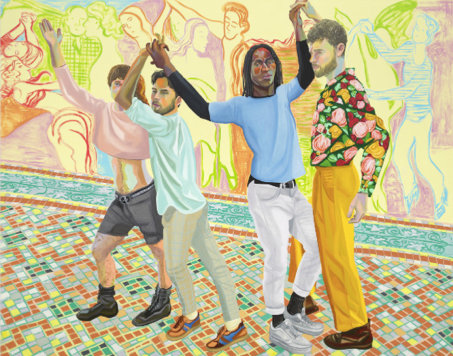 Nisenbaum’s painting, Mis Cuatro Gracias (Brendan, Camilo, Carlos, Jorge) (“The Four Graces”), recently entered the Hirshhorn’s permanent collection. The painting is part of a larger body of work that portrays dancers who are friends of the artist. The four men depicted belong to a salsa group that meets weekly at the New York club Gonzalez y Gonzalez, a transitory community formed around music and dance irrespective of age, nationality, or sexual orientation. All four “Graces” are artists who frequently dance together, and Camilo, second from the left, is Nisenbaum’s regular dance partner. As an allegory, the painting adapts the classical motif of the three graces (traditionally Greek goddesses representing charm, beauty, and creativity) for the contemporary era, resulting in a strong image that encompasses themes of body awareness, queerness, and social inclusion.

Can’t wait for the talk? Nisenbaum recently contributed to our Hirshhorn Artist Diaries video series. Watch her video and see what the artist has been working on.