What is America to you? Collage your own flag inspired by Nam June Paik’s Video Flag, representing your own experiences and ideas. 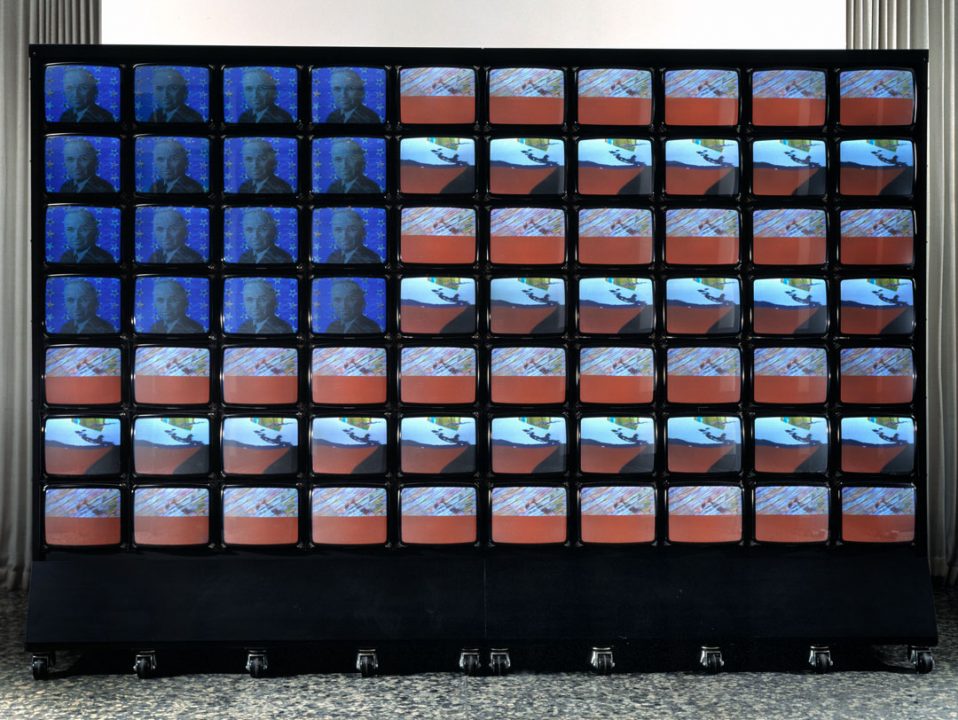 What do you see? Describe the colors and patterns. Do you recognize any shapes?

What does this artwork remind you of? What makes you say that?

This artwork is called Video Flag. It is constructed of seventy television monitors that were made in the 1980s and ’90s. Video Flag is almost 8 feet tall and 12 feet long. Each monitor on its own displays a rotating set of videos. When viewed as a whole, the visuals come together to create the feeling of the American flag design. Each monitor is connected to a timer so the images change quickly and show the viewer different flag visuals.

American artist Nam June Paik was born in Korea but fled in 1950 at the start of the Korean War. He moved to Hong Kong, Japan, and Germany, before finally settling in New York City. He is considered the founder of the video art movement. He began using television as a medium in the 1960s, and continued creating work in that medium for several decades. In 1996, the Hirshhorn commissioned Paik to create Video Flag. Paik thinks of Video Flag as a collage, carefully selecting images to display together. The images the artist chose include stars and stripes, a sequence of American presidents beginning with Harry Truman and ending with Bill Clinton, and broadcast news. While a flat paper collage displays the same images together constantly, this work is dynamic. The use of 70 TV monitors allows for multiple images to display at a time. The images flash by quickly, and when some images are viewed together, rather than alone, it changes the way we think about and understand them. The images flash by quickly, making the viewer have to stop and look, revealing moments we might not have otherwise noticed. Paik uses the television as another symbol of America to make us look closely at how we think about—and how the media depict—being American.

For this project, we take inspiration from Paik’s Video Flag and create our own paper collage flag using news clippings. We will use newspaper clippings, a form of paper media, instead of video media.