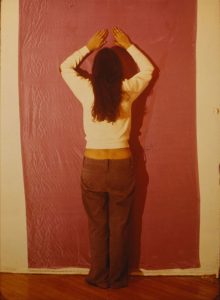 October 14, 2004, to January 2, 2005
This major traveling survey was a comprehensive consideration of the Cuban-born artist Ana Mendieta’s career between 1972 and 1985. Mendieta (1948–1985) is celebrated for using her own body to explore issues of gender and identity, and her work has significantly influenced subsequent generations of artists. Employing a combination of film and slide projection, as well as photography and other materials, the exhibition presented little-known performances from Mendieta’s student days in the innovative cross-disciplinary Intermedia Program at the University of Iowa, as well as her better-known actions in the landscape, such as the Silueta Series, made in Iowa and Mexico from 1973 to 1980. Landscape interventions; “earth body works” executed in Cuba, Canada, and the United States; and a selection of sculptures and installations dating to the early 1980s were also presented. The exhibition was accompanied by a definitive monograph on the artist. Olga Viso, the Hirshhorn’s Curator of Contemporary Art, was the exhibition’s organizing curator.