“The whole complex has been designed as one composition… Bunshaft’s design is not concerned with the grandeur of the Mall. It is concerned with the greater grandeur of his museum and it gives us an awful lot of beaux-arts pavement and pomposity that no longer seem to suit the taste and style of our times.” [Preliminary design criticized] Wolf Von Eckhardt, The Washington Post, February 6, 1971. 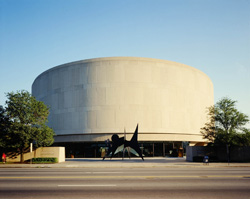 “The circular plan is not only clear, but also provides a pleasant processional sequence that goes a long way…. The fortress quality of the Hirshhorn suggests some rather obvious thoughts about the nature of housing art in our time. But the building’s architecture… is less the product of a desire to make a statement… than it is a logical progression in esthetic development….” Paul Goldberger, The New York Times, October 2, 1974.

“[The building] is known around Washington as the bunker or gas tank, lacking only gun emplacements or an Exxon sign… It totally lacks the essential factors of esthetic strength and provocative vitality that make genuine ‘brutalism’ a positive and rewarding style. This is born-dead, neo-penitentiary modern. Its mass is not so much aggressive or overpowering as merely leaden.” Ada Louise Huxtable, The New York Times, October 6, 1974.

The following observation is in reference to Lester Collins’ redesign of the Sculpture Garden in 1981:

“The parched severity of [the original Sculpture Garden] was not without merit, but the appeal was more to the mind than to the senses, more theoretical than practical…. The new design reinforces the identity of the garden as a welcoming urban park…. [This] park for art…serves the sculpture. The divisions of the space prove essential accents; artworks pop in and out of view as the spectator moves about the space….” Benjamin Forgey, The Washington Post, September 12, 1981.

Shown above are two views of the Hirshhorn Sculpture Garden before (left) and after (right) the 1981 redesign. The large open areas have been divided into more intimate spaces, replacing pebbles with verdant lawns, trees and bushes.

“[The Hirshhorn is] the biggest piece of abstract art in town-a huge, hollowed cylinder raised on four massive piers, in absolute command of its walled compound on the Mall…. The circular fountain…is a grand concoction…that for good reason has become the museum’s visual trademark.” Benjamin Forgey, The Washington Post, November 4, 1989.